Poetry invites readers into invisible, intimate places. North Sámi poetry creates such intimate places through narratives rooted in aesthetic and spiritual universals. Most of present day Sámi literary works deal with working out one’s own self-identity and, like anywhere in the world, each poet’s radius of self-identity reaches out in different manners to different areas. One theme, however, seems to be common: poems register alarm at violations of the intimate places that are home to the self. As a communicating medium, poetry provides suitable information about the conflict zones of the society regarding its identity, intimacy and locality crises. To exemplify these conflict zones as expressed through Sámi literature, I will focus on three representative volumes of current Sámi poetry authored by Rauni Magga Lukkari (b. 1943), Nils-Aslak Valkeapää (1943-2001), and Inger-Mari Aikio-Arianaick (b. 1961), all of which are available to an international audience through translation. Needless to say, the work of these three poets cannot be reduced to excluding examples of only one of the following three ways that intimate place is constructed or conjured.

As the motto of this essay suggests, the identification with báiki – meaning at the same time ’home and place’ – and siida – ’the closely-knit group of about a dozen families’– is the core affection of a Sámi person. The poet and literary translator Rauni Magga Lukkari reflected about this correlation in her prize-winning book, Árbeeadni (1996, in Engl. The Time of the Lustful Mother 1999). The orbits of individualization and socialization are sensed through the conflicts between the individual and her immediate milieu. Lukkari’s sense of place is involved with ordinary, everyday relations among the social components of her familiar surrounding, subject to limitations, hiatuses and discontinuities, and filled with obstacles, and privileged directions. The imaginative power, values, and norms manifested in the poem map the unspoken but grounded báiki correlations of the poetic narrator. From this core the poems express the female voice laden with memories and postmemories of generations while in the flow of motherhood with its joyous and painful events, serving and accompanying family members along their life-paths from birth to death. These experiences articulate contours of self-differentiation and self-disclosure, activated around the diverse, flexible and hybrid foundations of the self and the Other. Exploring the inherent struggles in (re)establishing again and again the feelings of closeness, safety, trust and transparency, two fundamental aspects of domestic intimacy are demonstrated: the emotional and the physical. Both of these aspects have the corporeity of the individual as a condition of experience and as a constituent of the báiki as the following poems underline:

They walkedside by side, / mother and daughter,

against a wind that made junipers bend

and the snow and their hemlinesrise

windlashing their chests / One could no longer think of summer and

Suddenly they both squatted / and gave birth to gaping baby girls

whom they covered with snow / so they would not freeze

As they were through with the first verse

the mother’s motherappeared from upwind

she lay down between the babies / and joined the singing”

In my breast / in my milk

there is the rennet of fear  / the whey

of hidden hatred / the pang

of strange understanding / the sour taste / of submission…

every time / her husband

with his words / touched her

I did not inherit / my mother’s churn

nor her separator / nor her sewing machine

I only inherited / my brother’s / wounds from the war

Sámi societies have faced relevant innercultural articulations due to the  intercultural conflicts of the last centuries. These changes are part of a bigger restructuring of Sámi society based on Western societal models. The birth as a unified nation for the Sámi ethnicities gave rise to a new type of intercultural and political self-awareness. One of the relevant attributes of it, is its indigenous quality.Although documented as early as 1831 (see the yoik entitled Same-eadnam alggo-olbmui pirra, in English: About the indigenous people of the Sámiland, by Jacob Fellman), it was strengthened very much by the global indigenous achievements of the late xxth century. This context supported the growth of a positive and efficientmodern collective identity. A wide range of traditional and contemporary experience from the collective level of the Sámi is manifested in the art of Nils-Aslak Valkeapää, whose artistic production is deeply grounded in Sámi oral tradition, modern daily life, and universal indigenous philosophy. His sixth book, Beaivi, Áhčážan (1988) won the Nordic Council’s literary prize in 1991, and was published in English as Sun, my father (1997). This book is an emblematic representation of Sámi indigenous consciousness. It questions the connections between power, knowledge and identity: all particularly important is substantiating today’s sense of socialintimacy. In his art, the artist and etnopolitician Nils-Aslak Valkeapää reflected not only on Sámi spirituality, but also on the spirituality of indigenous people in general. As a Sámi multimedia mythographer, Valkeapää linked to Sámi traditional values, symbols and stories that preserved guarding images and redirected private emotions by integrating their energy within a collective framework. Let us evoke some core feelings from his indigenous experience:

all summer we believed

you extinguish the life of rapids

the branches of our senses

the deeds of our wills

we did not understand this

not even in our nightmares

Further enlarging the spatial and social radius of the Sámi individual and community which desires security and trust, the present Sámi poetical discourse detects the urgency of supporting ecological and global responsibilities. Inger-Mari Aikio-Arianaick’s most recent cycle of 50 short poems was published in a book containing fifty nature photographs by Josef Timar. The Sámi original, Sámi suonat (2009), was simultaneously published in Finnish, English, German and Hungarian. In the foreword the poet remarks: „Nature wrote my poems. Nature wrote me.” (13) The archetypal depth of these poems resonates with the iconic character of the photographs, as word and image manifests from the poems as incantations. This Sámi incantation avoids the use of the grammatical first person; the lyrical subject reveals itself from a place of ecological responsibility and balanced self-critique. This is voiced through the first person plural, or in even more abstract speech, through the third person plural. In most of Aikio-Arianaick’s poems the crises of identity are interpreted within a fragmented and multifaceted paradigm that is culturally (socially and politically) constructed. In these poems, rooted in the global ecologically-responsible identity, we experience a contemplating meta-detector which describes processes representing individuals, forms of experience, identities, modes of behaviour, acts, desires and beliefs in a large context. Aikio-Arianaick’s poetry acknowledges the essential harmony of all things despite experienced disharmonies, and assigns equal values to all things in the overall scheme of existence, as the following poems exemplify:

How will our grandchildren fare

in this beloved homeland? (20)

Must something / always be destroyed
for the new to be born? (68)

Every human society yearns for intimacy on personal, communal and transcendent level. The traditional world-view of the Sámi as reflected on the membrane of their drums, places the Sun and the Cosmos in the center of rela-tional evaluations of human beings. Sámi narratives carry much information about this crucial paradigmatic difference to „civilized” cultures.The reflection on such ties refines the outsider’s and insider’s sense and responsibility of place and home, allowing for a more complex dialogue of intimacy to grow and deepen. These intimate processes foster inner transformations and provide encounters and confrontations with the Other and otherness. 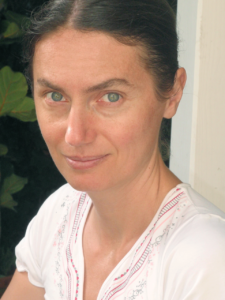 Johanna Domokos is a literary scholar and a multilingual author. Her research field is the multicultural developments in the Nordic literary fields (esp. Sami and Finish). Her recent booksare: ”Sami cultural and intercultural conjunctions” (2011, Specimina Fennica 16), and ”Multilinugalism and multiculturalism in the Finno-Ugric Literatures” (2011, FUSA8, ed. together with Johanna Laakso). Presently she is affiliated to Dep. of Linguistic and Literary Studies, University Bielefeld.