An ancient country with ancient languages and literatures

Ethiopia is one of the most ancient countries in the world. The Ethiopian alphabet has been in use since 4500 BC. Literature in Ethiopia has been dominated by the Ethiopian Orthodox Church for many centuries until secular writing appeared in the early 1900s. In Ethiopia the writing system is known as ‘Ge’ez,’.

‘Ge’ez’ is an ancient South Semitic language that developed in the region that is now northern Ethiopia, namely in the Amhara and Tigray regions. It was the official language of the Kingdom of Aksum and Ethiopian imperial court. Ge’ez literature is dominated by the Bible. There are many medieval and early modern original texts in the language. Most of its important works are also the literature of the Ethiopian Orthodox Tewahedo Church, which include Christian liturgy (service books, prayers, hymns).

The number of languages spoken in Ethiopia is an astonishing 83 or more, falling into four main language groups: Semitic, Cushitic, Omotic and Nilo-Saharan. There are 200 different dialects in the Country.

The Semitic languages of Ethiopia are related to both Hebrew and Arabic, and are pronouncedly influenced by Ge’ez, the ecclesiastical language.

The principle Semitic language spoken in the north-western and central parts of the country is Amharic, which is also the official language of the modern state. Other main languages are Tigrigna, Guraginya, Adarinya, Afan Oromo, Somalinya, Sidaminya, Afarinya, Gumuz, Berta and Anuak. The Tigrigna- and  Amharic-speaking people traditionally inhabit the northern and central parts of the country

Peoples that speak languages belonging to the Omotic family live in southern and south-western parts of the country. Nilo-Saharan speaking groups live along the Ethio-Sudan border lines. They also feature as cross-border languages and cultures. For example, the Anyuaa, Nuer, Opwo, Surma, Nyangatom and Toposa live both in Sudan and Ethiopia and are therefore considered as cross-border languages and cultures.

As already indicated, at least seventy languages are spoken in present-day Ethiopia as mother tongues, a few by many millions, others by only a few hundred persons. The number of distinct social units exceeds the number of languages because separate communities sometimes speak the same language. More than fifty of these languages and those spoken by the vast majority of Ethiopia’s people are grouped within three families of the Afro-Asiatic super-language family: Semitic (represented by the branch called Ethio-Semitic and by Arabic), Cushitic, and Omotic. In addition, about 2 percent of the population speaks the languages of four families–East Sudanic, Koman, Berta, and Kunema–of the Nilo-Saharan super-language family.

It is crucial that these languages receive due attention, and that they are cultivated and promoted, empowering them to better serve the speakers. Essential aspects of the life of a people are encoded and expressed in its language.

For many decades, Ethiopian writers and researchers have attempted to collect, classify, analyze and document the various language groups and their poetry in their books, monographs, articles and theses that deal with the social, cultural, historical, political, religious, literary and linguistic aspects of a given linguistic community. In their works the authors have presented a variety of historical and political poems, praise songs, war songs and heroic recitals, dirges and funeral songs, work songs, wedding songs,wedding gown, religious poems, hunting poems, children, songs, etc. These works have contributed (and continue to contribute) significantly as important source material for scholars and researchers and inspire other writers to continue the task of collecting, classifying, analyzing, documenting and preserving Ethiopian literature.

Despite such efforts only Amharic has had the chance to flourish and dominate all other languages in Ethiopia. The PEN Center believes that all have the rights and potential to develop.

Moreover, Ethiopia’s rich literature is unknown in the rest of the world. One of the objectives of the Ethiopian PEN Center is to make the Ethiopian literary work known through out the world using different means, including translating classics of Ethiopian literature to some of the international languages. The Center hopes to contribute to the peaceful coexistence and tolerance among various linguistic communities through translation and publications on various aspects of the languages.

In order to help ensure that linguistic rights are protected in Ethiopia, The PEN Center will have the following objectives:

The Ethiopian PEN Center strives to develop, promote, and preserve the languages and oral/written literature of the various nations and nationalities of Ethiopia. The Center will use the following strategies to realize the five objectives listed above.

– Encouraging linguistic researches on various languages and dialects of the country, and thus working toward identifying the number of languages and their distribution;
– Supporting study of the language situations of the country and providing decision-making bodies with useful linguistic information.
Collecting, studying, and putting to use the wealth of oral literature and folklore of the various nations and nationalities of Ethiopia;

– Facilitating the recording of as much linguistic and folkloristic data as possible, especially of endangered traditions; conducting scientific inventories of these and preserving them for posterity;
– Funding or commissioning researches on written literature, manuscripts, documents and other literary works available on parchments or otherwise;

– Facilitating, encouraging, and promoting the development of written literature in the various languages of Ethiopia;

– Promoting and facilitating the practice of the art of translation in order to transfer modern and traditional/indigenous/ knowledge from one to the other;

– Preparing international seminars, workshops, and symposia on language and literature and thereby facilitating the outreach of awareness through research findings;

– Publishing books and professional journals to communicate the research output of the Center to a wider audience;
–  Acquiring experiences of the International PEN family’s best practices and adapting them to fit Ethiopian circumstances. 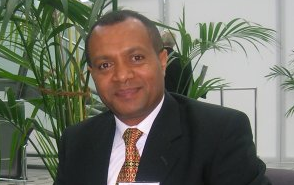 Solomon Hailemariam is the President and founder of the Ethiopian PEN Center. He is an Ethiopian novelist, translator and an academic. He is currently working as a Country Director of Panos Ethiopia. In his spare time he is lecturing in Addis Ababa University and New Generation University College. He is the winner of the 2011 Burt Award for African Literature.