Arms stretched over his head, and his mouth open in a half yawn, he is standing at the gate, looking down Khumbulani Street.

A thin stream of effluent snakes its way along the far edge of this street, almost as if on tiptoe. Although its stench pervades the morning air, Lungisani is now used to it as the effluent has been flowing unchecked for over a month, and so he is not bothered.

Women are bent over outside some of the gates to the houses that crowd the street in from both sides, sweeping their yards, tidying them up for the new day.

A radio is blasting mbaqanga music somewhere, and accompanying the music are the raised voices of children at play, and by their noise, Lungisani knows they are playing hit me.

His eyes blurred with tears brought about by the yawning, the shirtless Lungisani can see that conversations are jumping across and along the street between the women as they sweep. He cannot catch what is being said, but can only see the accompanying gesticulations with the free hand, or the sweep, as dust clouds, like the speech bubbles that are on the walls of his classroom at school, rise over each of these women from the sweeping.

One two three four five, Lungisani is counting the women with his eyes. Five mothers are sweeping and gossiping, the sentence also jumps into his mind, as he places his foot on a half brick. One fat mother and four very thin mothers are sweeping the five yards of their five houses in autumn – suddenly, one of these women stops sweeping. She is the fat one. Still bent over, her face is now looking in his direction. Then her body jerks upright, very much like a person who has been caught defecating in the forest when there is no water in the township would do, whilst she is still looking in his direction.

Even in the distance, Lungisani can see that her mouth is wide open, as if in shock, or something close to that. Then the face of this woman snaps to her neighbour, a thin one, who also jerks upright, and both women look in his direction.

Then, one by one, from both sides of the street, all the women quickly straighten, and they all look at Lungisani.

Lungisani’s eyes are fixed on the women too. All their mouths are opened wide, as if a song, the kind sung when izinyanga and their mediums are having their dances, will suddenly erupt from them and they would also leap into a furious dance, their grass sweeps flailing in his direction in some superstitious denial.

There is nothing wrong with our family; he wants to shout at them, as he removes his foot from the half brick. Please don’t look at me like that.

‘They are coming!’ A hoarse shout erupts from behind him, startling him from his thoughts.

Lungisani whirls around. A man is running hard towards him from up the street. Lungisani finds himself gaping, and also realising that the women had not been staring at him, but past him at this man. The man’s white shirt is in tatters that flap to the wind, just like that of the scarecrow that his mother erected in the family maize field in the forest behind the township – but this man in not a scarecrow. Lungisani instantly recognises him.

It is Mr Nkani, the Grade 7A teacher at his school. The one who gave his brother Persuade a thorough beating with a baton stick at school assembly last year for being found with a cigarette pack in his school bag. The one who also has the picture of his face on the posters that are around the township, the posters that are tied to trees, to electricity and telephone poles, and are also stuck on walls at the shopping centre where his father works. The one people say belongs to the opposition, and is going to be voted for in the elections next week.

‘Hide!’ Mr Nkani shouts again as he races past him. ‘They are coming!’ Blood is flowing down the side of Mr Nkani’s face from the top of his head, and the tatters of his shirt are streaked with blood too, as if somebody has been spraying him with raspberry.

‘Lungisani!’ This scream comes from inside the gate. It is his mother. Her face is looking at him out of the open window of the kitchen, and dread fills it. ‘Wena! Come at once!’

Tatenda’s chubby face peeps beside that of his mother, and his eyes are opened as wide as the hollow centre of ring doughnuts

Ah ah, it is then that Lungisani realises that the street is now empty. The women who have been sweeping their yards and the fleeing Mr Nkani have all disappeared, but in the distance, the mbaqanga music still blares to the township, and the voices of the children are still calling out.

‘It’s hot inside,’ Lungisani replies his mother, his voice sulking, and pulling up his shorts which are sagging to the side from a loose waistband.

‘Lungisani!’ MaNdlovu abruptly shouts his name again. ‘This child!’ and her face disappears from the window.

Then Lungisani sees them boil from around a corner up the street. The street corner where the running Mr Nkani had appeared from. They are also running hard, running harder than Mr Nkani had been, a group of boys and girls wielding stones and sticks, some yelling and some whistling.

Just then, MaNdlovu appears behind Lungisani. With both hands, she snatches him up and flees around the house with him, as if he does not weigh anything at all.

They now all stand at the closed window of the kitchen, peeping towards the gate where Lungisani had been standing, their faces a paradox of expressions – fear on Lungisani’s mother, who fully knows what the Green Bombers represent, anger on that of Lungisani – he still wants to be outside the gate, and wide eyed excitement on that of Tatenda, who wants to watch the action from the safety of the window.

Tatenda, three years younger than Lungisani who is ten, is Lungisani’s friend. He lives next door, and they also go to the same school, where Tatenda is in Grade 2B, and Lungisani is in Grade 5A. Tatenda is Shona, and Mlungisi is Ndebele.

Then they see them flash past the gate. All the faces of the Green Bombers are contorted as they run – bent on catching, so Lungisani knows. The Green Bombers never run like that without wanting to catch somebody, so he also knew. Last week when coming from a game of street soccer from the other side of the township with Tatenda and other boys, they had seen the Green Bombers chasing a man and a woman wearing an opposition party t-shirt just like this. The man and woman had been caught in front of them and beaten until they were covered in blood and lay on the ground just like dead people. 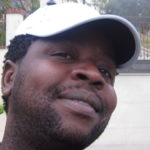