PEN International is seriously concerned for the well-being of Uyghur pop musician and lyric writer, Ablajan Awut Ayup (popularly known as Ablajan), who was taken into custody by state security agents in Urmqi, XUAR on 15 February 2018. No reason has been given for his detention and his family have not been informed of the charges against him or the location of where he being held. PEN International believes he is held for peacefully exercising his right to freedom of expression and calls for his immediate and unconditional release.

• Protesting the arrest of Uyghur singer and lyric writer Ablajan Awut Ayup, and calling for his immediate and unconditional release;

•Urging the authorities to reveal where he is being held and seeking assurances of his well-being; • Urging authorities to grant him access to a lawyer;

• Urging authorities to charge or release him;

• Protesting the renewed crackdown on Chinese Uyghurs who promote Uyghur culture or criticise the government;

• Reminding the Chinese authorities that Article 35 of the Constitution of the People’s Republic of China provides for freedom of speech and that as a signatory to the International Covenant on Civil and Political Rights, which provides for freedom of legitimate expression, the right not to be arbitrarily detained and the right to a fair trial, they are obliged to “refrain from acts that would defeat or undermine the treaty’s objective and purpose”.

**Please contact the PEN International Office in London if sending appeals after 31st July  2018 ** Please keep us informed of any action you take in regard to Ablajan Awut Ayup’s case, including any responses you receive from the authorities.

Born in 1984, Ablajan is a pop singer and known as “Uyghur Justin Bieber.” He has written over 400 songs and is known for promoting Uyghur culture and identity as well as building a cultural bridge with Chinese through his bi-lingual songs. In 2017, the BBC portrayed him as a model of integration for his appeal to both Uyghur and Chinese audiences. However, he has faced hostility from both the religious conservatives and the Chinese state. He is a recipient of “Star of the Silk Road” Award 2013 by the Xinjang Cultural Bureau.

The XUAR region in north-west China is home to many Muslim Uyghurs, a Turkic-speaking ethnic group, some of whom have waged a low-level separatist struggle for independence from Chinese rule for decades. Repressive government policies have led to severe economic deprivation amongst the Uyghur community and fomented ethnic tension between Uyghurs and Han Chinese. PEN International believes that the Chinese government has used the activities of armed opposition groups in the region as an excuse to suppress peaceful political and cultural expression.

The XUAR region has experienced several violent clashes in recent years, and its unrest has been linked to other attacks in China. On 28 October 2013, a fatal car crash and explosion in Tiananmen Square – which resulted in the deaths of two tourists and injured  38 others – was later attributed to members of a Uyghur separatist movement. The BBC estimates that more than 100 people have been killed in violent clashes in the XUAR region in recent years. On 19 December 2013, the Chinese government launched a new “grand strategic plan” for the XUAR, in which it pledged to make “maintaining social stability” the primary strategic goal within the XUAR.

PEN is concerned by an apparent renewed crackdown on promotion of Uyghur language, culture and dissenting voices. On 15 January 2014, Uyghur writer, academic, PEN member and critic of China’s policies towards to the Uyghur minority, Ilham Tohti, was arrested by authorities at his home in Beijing. He was charged and convicted of ‘separatism’ after a two-day trial at the Urumqi People’s Intermediate Court, which also ordered a seizure of Tohti’s assets.

In 2006, Tohti, a member of Uyghur PEN,  became a target of frequent harassment by the Chinese authorities after he founded Uyghur Online, a website promoting understanding between the Uyghur ethnic group and Han Chinese. It was claimed that Tohti was under investigation for the promotion of separatism, alleging that he had recruited followers through Uyghur Online. Tohti had reportedly expressed fears on Uyghur Online about increased pressure on Uyghurs following the Tiananmen Square car bomb attack in October 2013.

On 15 July 2013, Mutellip Imin, an ethnic Uyghur, student and volunteer with Uyghur Online was detained by police at Beijing International Airport as he attempted to return to Turkey, where he was a student. Imin was reportedly held without charge for 79 days in his hometown outside of Hotan, Xinjiang. Released on 1 October 2013, the police reportedly kept his passport – effectively barring him from returning to Turkey to continue his studies. Similarly, on 28 September 2013, Perhat Halmurat, editor of Uyghur Online, was reportedly taken into custody at Beijing International Airport on charges of “attempting to escape the country” as he was about to board a flight to Turkey where he had received a scholarship to study anthropology at Istanbul University. He was released 16 hours later following pressure from several prominent activists. 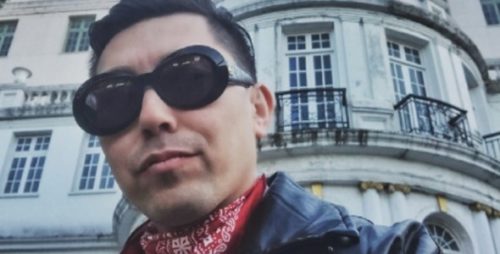 Image posted on Ablajan’s Weibo account from Shanghai, days before his detention in February 2018.