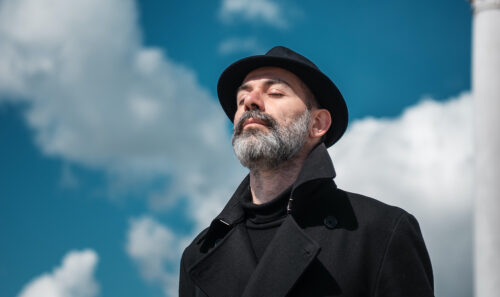 In 2006, I was invited to give a speech about Muhammad Cartoons and freedom of speech, at the Central European University [CEU] in Budapest. I lived and worked as a cartoonist in Iran, and for my safety, I had to keep my participation secret. In my speech, I said that mixing blasphemy and hate speech in detrimental to freedom of speech. Ever since, my life has been directly affected by the consequences of publishing Muhammad Cartoons.

Three years later I had to leave my country as fast as possible because of the high risk of imprisonment and heavy charges, because I was defending freedom of expression and being connected to International human rights organizations!

I grew up inside a real Islamic State, I witnessed how Sharia has been applied to lives and destiny of millions of Iranians, regardless of their believes, opinions, culture and lifestyle. Like other millions of Iranian kids, I had to declare myself Muslim officially against my will, because in Iran no-one has the rights to be atheist or even agnostic. That’s how I know about Islamism and political Islam.

On 2010, months after leaving Iran and living in Paris as a refugee, sheltered by Iranian French angels, I was contacted by a journalist to be interviewed by “Charlie Hebdo“. That’s how I’ve met the staff and some cartoonists of that magazine for the first time. Later in 2011, after Islamists burned Charlie Hebdo office, I was with Charb and Luz at a national tv panel and I warned Charb of the attitude of Islamists, that they never give up when there’s a fatwa…

Charlie Hebdo and France lost their best cartoonists and journalists on January 7th 2015. But Islamist terrorism couldn’t kill Charlie [the assasins shouted we killed Charlie on the streets of Paris before escaping].

Five years after this barbaric assassination, the Satirical French magazine republished the same Muhammad Cartoons, the same day as the trial of this terror started. The message is very clear: they didn’t give up, they’re not scared and simply they’re enjoying what’s in the French constitution and protected by law: Freedom of Expression and Blasphemy.

After the terrorist attack, a French ngo called SOS Racisme together with another NGO called dessiner créer liberté and Charlie Hebdo, started a nationwide pedagogical program for students and shared an educational kit to all French schools to be used in the cours of freedom of expression. Samuel Paty – beheaded by an Islamist terrorist was one of the teachers who used this kit and showed it to his students. He lost his dear life for that.

Once again the “freedom of Expression” has become the main topic and viral subject anywhere in the world, and once again it shows that the whole world needs much more information and education about this article 19 of the declaration of human rights1. This topic is a very serious matter and a very essential element for all free countries who share the values of human rights.

Islamists used Muhammad Cartoons as a pretext to spread fear in Europe, because human rights values stop them dominating the World.

Unfortunately many intellectuals and even cartoonists fell into the trap and called for “respect” and “not offending” Islam. That’s the point: Islam is a religion that belongs to all humanity, no nation or ethnicity can claim this religion exclusively! That’s why criticizing Islam called Blasphemy and it’s not Racisme at all. Islam isn’t a race!

I published one very symbolic cartoon at the anniversary of Charlie Hebdo massacre in French newspaper La Croix, as my hommage to assassinated colleagues – one of them my friend. And I shared it in social media, as I always do. It was no surprise for me to receive many insults, harassments and bullying for that, but I was very surprised by a serious death threat. 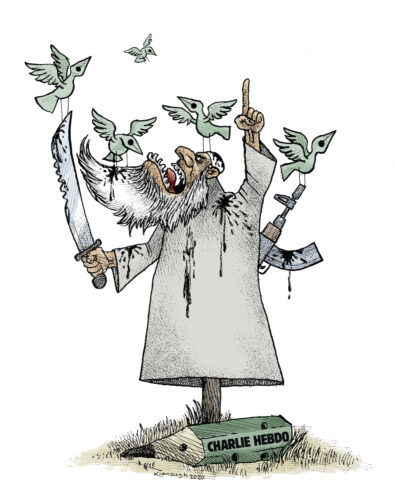 While my cartoon showed only an Islamist and no Muhammad Cartoons. Those who try to limit freedom of expression by using “offense”, “respect”, “racism” in their speech and those who made protests against publishing Muhammad Cartoons but didn’t do the same for barbaric murder of Samuel Paty, they’re helping Islamism to spread in Europe and other free countries. I’m receiving death threats in Europe only for doing my job, because these guys justify violence and help Islamism to be spread in the World.

Freedom of Expression as a fundamental right has been less and less visible. What remains is just an article . Freedom after expression however has become a real challenge. Heroes, like Moroccoan born former Charlie Hebdo journalist Zineb El Rhazoui, who practice freedom of speech in our democracy, are under full protection of police and bodyguards 24/7, because Islamists are demanding their death. They lost their freedom to protect this value for others.

1. The Universal Declaration of Human Rights is a milestone document in the history of human rights. Drafted by representatives with different legal and cultural backgrounds from all regions of the world, the Declaration was proclaimed by the United Nations General Assembly in Paris on 10 December 1948 as a common standard of achievements for all peoples and all nations. It sets out, for the first time, fundamental human rights to be universally protected and it has been translated into over 500 languages.

Article 19:
”Everyone has the right to freedom of opinion and expression; this right includes freedom to hold opinions without interference and to seek, receive and impart information and ideas through any media and regardless of frontiers.”

Freedom of expression is also defined and protected by Article 10 of the European Convention on Human Rights; it constitutes one of the essential foundations of a democratic society. The CNCDH is fundamentally concerned with safeguarding, and if necessary, extending, the public space for free discussion which is consubstantial with democracy and the rule of law.

The Constitutional Council reaffirmed in 1994 that freedom of expression was a “fundamental freedom all the more precious as its existence is one of the essential guarantees of respect for other rights and freedoms.”

It is both an individual freedom and a collective freedom. Yet this freedom remains fragile, even threatened, and in this regard, no country is immune to criticism.

Kianoush Ramezani was born and raised in Iran. His mother tongue is Persian, and he works in French. In 2009, he supported the Iranian pro-democracy Green Movement by his work. Soon after that he had to flee Iran, because of persecution due to his work. He has been awarded at the Angouléme Comics Festival in France in 2018, for his cartoons in Marseille in 2014, and for his illustrations in Geneva, Switzerland in 2014. In 2014, he gave a TED presentation in The Hague: Cartoons, a Dangerous Art Form. His favorite artists are Tove Jansson, Antoine de Saint-Exupéry, Charles Baudelaire, Franz Kafka, Sohrab Sepehri and George Orwell. Now Ramezani lives in Finland.