The 20th of June is UN’s World Refugee Day. It is about sharing responsibility for global issues. Many PEN centres around the world host a number of events.

Finnish PEN and Artists at Risk invites You to join us at the embassy of Egypt in Helsinki (Puistokatu 5 A 3) on Wednesday 20 June 2018 at 4 pm. We’ll commemorate the strength, courage and perseverance of refugees around the world and urge Egypt to #FreeGalal! Spread the word, and see you there, friends! 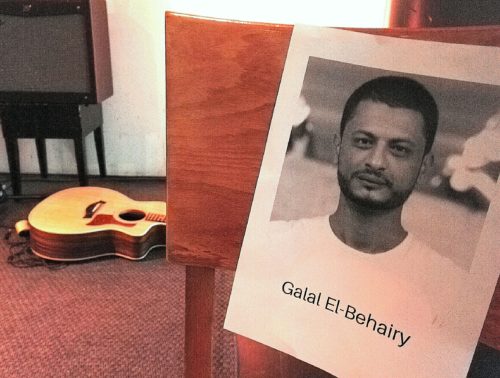 Ramy Essam‘s newest single “Balaha” was released in February to international acclaim. It’s provocative style resulted in arrests in Egypt, however. Currently the author of the lyrics, the poet Galal El-Behairy, is under arrest and being prosecuted by both civil and military courts. An arrest warrant in absentia has also been issued for Ramy Essam.

Ramy Essam is a star of Arabic rock music. He had to leave his native Egypt to be able to pursue his musical revolution and songs of protest. He came out through a residency at Artists at Risk (AR) Safe Haven Helsinki in 2014, and since then has resided in Sweden and Finland.

On February 28th the Egyptian Minister of Culture went on live TV to denounce El-Behairy and in particular for his latest book of poetry The Finest Women on Earth. Since then, TV hosts have made public calls to revoke Essam’s citizenship and to prosecute him (in absentia) as a foreign spy. Some have even called for his “legal slaughter”.

On March 3rd Galal El-Behairy was arrested during a harrowing attempted escape. His whereabouts were not disclosed to his family or lawyers until he appeared before the high state-security prosecutor on March 10th. He showed obvious signs of severe beatings and torture. Galal’s sentencing by Military Courts has since been delayed until June 27th.

We condemn this brutal repression of the freedom of expression.
We demand the immediate and unconditional release of Galal El-Behairy!

THE DEMONSTRATION IS ORGANIZED BY:
Artists at Risk & Finnish PEN