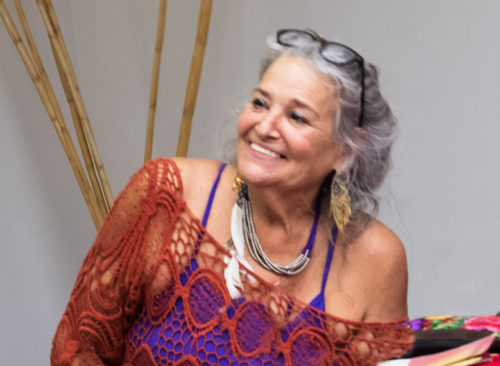 Judyth Hill: The Hand That Holds the Pen Can Rock the World

We can stage a play and a rally.
We change diapers, genres and the world.
We pick up the tempo, the children and the phone.
We make dinner, metaphors, and commitments.
Because we can write a novel, a poem and our Senator.

I believe in writers.
We know the way of snake and moon, which is to say, edit and revise,
shift and change.
Because we apply ourselves, lipstick, and narrative structure.

Because we can form a carpool, a sentence, a chorus and a committee.
Because we think big and start small.
We take heart, take hands.
Make meaning, make music.

I believe in writers.
Because if I have and you need.
I know to lend and you know to borrow!
Because we write mysteries and bills.
Because we think circles and families.
Not me and mine, but us and ours.

Because we know how to talk together,
To cut —to the chase, and not to the funding.

We are part Papa H, part Lorca and Rimbaud,
Octavio Paz, and Juhani Aho.
A smidgen of Rumi, and Barbara K,
Salinger, Marquez and Austin – J!
Daughters of Mirabai and Emily D,
Sons of Cervantes, Rilke and Keats.
James Baldwin, Gertie S. and Luis U.
Machado, Rimbaud and Dr Seuss,
We’re Dickens, and Langston, and Pablo N,
Morrison, Hopkins and Allen G.
We’re talented and passionate and plain.
I believe in writers.

We’re the hope of the ozone layer,
Mothers of the rain forests,
Brothers of the homeless, Children of peace.
I believe in writers. Writers can. It’s time. We must.

Judyth Hill, poet, performer, writing teacher, and author, lives in the splendor of the ponderosa and aspen-covered mountains of Northern Colorado. She is the author of the internationally acclaimed poem, Wage Peace, published worldwide; set to music, performed and recorded by national choirs and orchestras.

She is the current President of PEN San Miguel, conducts poetry and memoir workshops and classes at elementary and high schools and conferences world-round, including the San Miguel Writers Conference. Hill leads global WildWriting Culinary Adventures in France, Mexico, Slovenia and Italy, and edits memoirs, novels and poetry manuscripts. She was described by the St. Helena Examiner as, ”Energy with skin” and by the Denver Post as, “A tigress with a pen”.