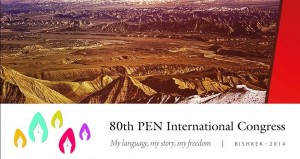 To access resolutions adopted by the Assembly of Delegates please visit: http://www.pen-international.org/campaign/how-to-campaign/resolutions-adopted-at-congress-bishkek-kyrgyzstan-2014/

In addition to the resolutions, the following decisions were taken during the Bishkek Assembly:

1. Margie Orford (South Africa PEN) and Teresa Cadete (Portuguese PEN) were elected to the Board for a three-year term. Yang Lian and Sylvestre Clancier came to the end of their time on the Board of PEN International.

2. Simona Škrabec, (Catalan PEN) was elected Chair of the PEN International Translation and Linguistic Rights Committee for a three-year term.

The congress in pictures