The programme for Ijahis idja -indigenous music festival is published. The festival is organized in August in Inari for the 16th time. This year the festival’s theme is Saami languages, inspired by the United Nations’ year of indigenous languages. The festival weekend offers not only concerts, but also a discussion panel, Saami sports competition, Saami handicraft market as well as programme for children and youth.

The event starts on Friday 16.8. with Children’s Ijahis Idja. During the day pre-registered children and youth attend workshops and get to see short Saami films. They also get to show off their own talent in the youth concert Násttážat. Also Wimme Saari, Mihkku Laiti and the indigenous guest artist Aydar Churupov perform in the concert. Churupov comes from Siberia from the region of Altai, and represents the indigenous Telengit people.

The festival’s opening ceremony takes place on Friday at 6 p.m as yoiker Nils-Heikki Paltto and poet Inger-Mari Aikio enter the stage. At the same time the Saami handicraft market opens. After the ceremony Ijahis Idja- arena starts on the outdoor stage. In honour of UN’s year of indigenous languages Finland’s PEN, the writers’ association that promotes freedom of speech arranges a panel discussion Our Golden Language about the meaning of Saami literature to the Saami culture, Saami society and the endangered Saami languages. Pirita Näkkäläjärvi, a board member and the chair of the Translation and Linguistic Rights Committee of the Finnish PEN will lead the panel discussion.

The first concert on Ijahis Idja’s main stage on Friday will be by Anna Morottaja, an Inari Saami singer who masters the tradition of livđe. Morottaja launches her debut album in the concert. After her, Niko Valkeapää, who also has recently launched a new album will perform with his band. Next in line is perhaps the most well known and popular Saami artist of them all, singer Mari Boine from Norway. Like Valkeapää, also Boine has recently launched new music. Friday’s last concert will be the up-beat DJ-collective Article 3, which plays music from Saami artists as well as other indigenous artists.

On Saturday 17.8. the programme starts with a concert at Saami museum Siida’s outdoor museum, in Tirro farmhouse. The intimate concert features yoiker Wimme Saari. The tickets for the concert are sold in Siida on the week of the event.

The festival area opens at 3 p.m. on Saturday. Saami handicraft market continues in the area. Traditionally Ijahis Idja- festival has offered a possibility to attend an indoor concert in the auditorium of Saami cultural center Sajos early on Saturday evening, and this year makes no exception. Festival’s theme concert I Šould Like To combines together poetry, songs, yoiks and music in a fascinating way. Niko Valkeapää, Ánná Káisá Partapuoli, Øystein Nilsen and Inger-Mari Aikio will take the stage in the concert.

Máttut- concert opens the programme of the main outdoor stage on Saturday. In the concert Anna-Reetta Niemelä, Matias Niemelä, Petra Biret Magga-Vars and Anna Näkkäläjärvi-Länsman yoik the yoiks of Jávrrešduottar. Janne Lappalainen accompanies them with string instruments and percussions. Saturday’s programme also includes concerts from yoiker Øystein Nilsen, indigenous guest artist Aydar Churupov, Ume Saami singer Katarina Barruk and her band, electronic pop group ISÁK and the legendary folk rock group Sančuari on Ijahis Idja’s main stage outdoors. All of the above perform in Ijahis Idja now for the first time. Along the concerts is also a sports competition. The sport will be lassoo throwing, which requires accuracy and speed. The competition takes place in the yard of Sajos. 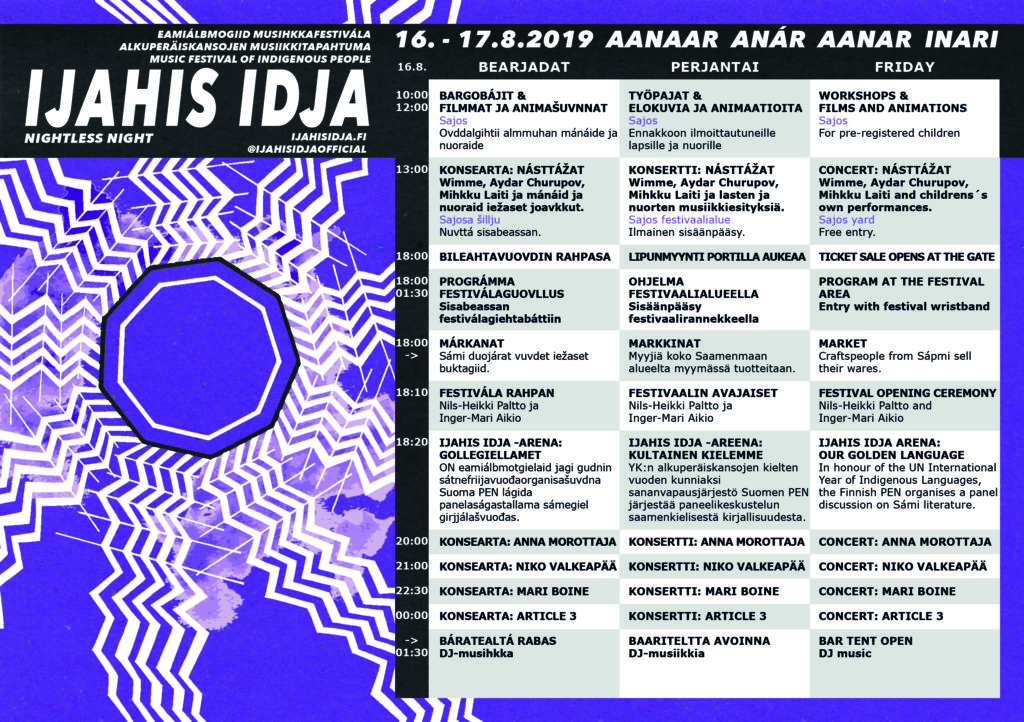 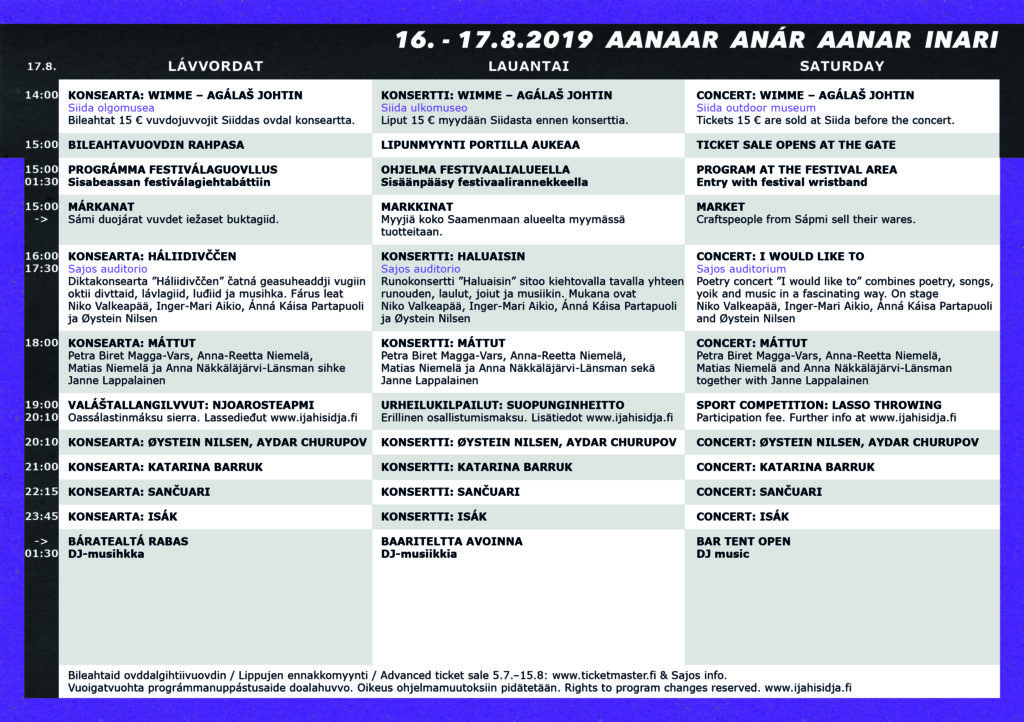