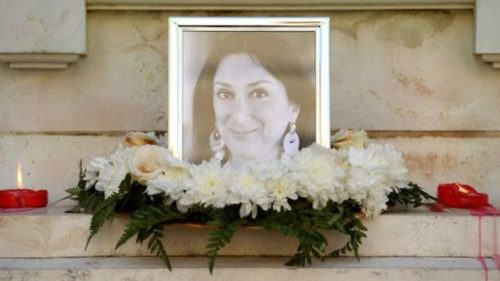 Daphne Caruana Galizia, a prominent investigative journalist and blogger, was assassinated on 16 October 2017 near her house in Bidnija, Malta, in a targeted car bomb attack. Caruana Galizia spent much of her work in recent years exposing government corruption – most recently reporting on the Panama Papers, which exposed the offshore activities of powerful officials and companies around the world. Her blog, Running Commentary, which included investigative reports on Maltese politicians, was one of the most widely read websites in Malta.

To mark six months since her killing, over 250 writers, publishers and PEN members, joined a PEN International open letter to the European Commission calling for justice for Daphne Caruana Galizia, for the protection of journalists and whistle-blowers in Malta and raising concerns about the behaviour of the management of Valletta 2018, European Capital of Culture in relation to her case.

PEN is also concerned about ongoing reprisals against investigative journalists and human rights defenders working to secure justice in Daphne Caruana Galizia’s case and for the corruption she exposed. For example, senior officials within the office of the Maltese Prime Minister, recently implied that Caruana Galizia’s son Matthew Caruana Galizia, himself a Pulitzer Prize-winning journalist, colluded with his mother’s killers. Prime Minister Joseph Muscat is also pursuing a libel case against him. The Shift News, an independent media outlet launched after Caruana Galizia’s assassination which has pursued a number of her stories, is currently facing the threat of a financially crippling SLAPP (strategic lawsuit against public participation) from the Jersey-based firm Henley & Partners, who had taken legal proceedings against Daphne Caruana Galizia prior to her death.

In addition, Martina Urso, a civil society activist from the anti-corruption group Il-Kennesia, which campaigns for justice for Daphne Caruana Galizia, has also been subject to a torrent of misogynistic abuse – including from members of the Maltese administration and the Artistic Director of Valletta 18, Mario Philip Azzopardi, following her participation in a civil society protest in London on 20 April. Urso was subjected to hundreds of online threats, and her ID card and home address were leaked from a reportedly fake Facebook account and shared online.

On World Press Freedom Day, we reiterate our concerns regarding the investigation by the Maltese authorities into the assassination of Daphne Caruana Galizia, which PEN believe does not meet the standards of independence, impartiality and effectiveness required under international human rights law. PEN International also urges EU member states to their utmost to protect journalists and human rights defenders in Malta and to urge the Maltese authorities to do everything in their power to bring all individuals involved in the killing of Daphne Caruana Galizia to justice.

Write to your Foreign Ministry, including this information, and calling for:

· The Maltese authorities to ensure a full, independent, impartial and effective investigation into the assassination of Daphne Caruana Galizia and the crimes she exposed;

· Support independent monitoring of the legal proceedings in Malta concerning the assassination and the 34 libel trials being pursued against Daphne Caruana Galizia’s estate.

PEN members are encouraged to:

· Publish articles and opinion pieces in your national or local press highlighting the case of Daphne Caruana Galizia, her investigations before her death and any links to your country;

· Organise public events, stage readings, press conferences or demonstrations, highlight Daphne Caruana Galizia and PEN’s serious concerns about the investigation into her killing and continued harassment of journalists and rights defenders in Malta;

The very same individuals Caruana Galizia was investigating remain in charge of securing justice in her case, despite a judicial challenge in Malta’s constitutional court from her family, who have now been completely shut out of the assassination investigation. We therefore welcome the initiative of the Parliamentary Assembly of the Council of Europe, which is taking the extraordinary step of sending a special rapporteur, Dutch MP Pieter Omtzigt, to scrutinise the investigation.

Abuse of Daphne Caruana Galizia by Maltese officials continues even after her death as well as after PEN’s letter of 16 April. The Maltese foreign minister Carmelo Abela referred to Daphne Caruana Galizia’s case as a “fuss”. In addition, PEN is seriously concerned about the fact that senior government officials including Prime Minister Joseph Muscat are insisting on trying thirty-four libel cases against Daphne Caruana Galizia, which have now been assumed by her family. PEN believes that these proceedings are in direct reprisal for his mother’s work in investigating corruption within the current Maltese government. The Prime Minister is compelling Matthew to return to Malta to stand trial, despite independent security experts advising Matthew to remain outside Malta due to substantial threats to his life there.

To read PEN’s recent joint report to the United Nations on the situation of freedom of expression in Malta, please click here.