A new Board of PEN Finland has been elected in its Annual Meeting held on 13 February 2019. Playwright and film scriptwriter Veera Tyhtilä and Doctor of Philosophy historian Oula Silvennoinen was elected as president and vice president respectively.

In addition, Doctor of Social Sciences Mojibur Doftori will continue as a member of the Board. PEN is pleased to underline that the mother tongue of the Board now includes Finnish, Swedish, Sami, Spanish and Bangla. 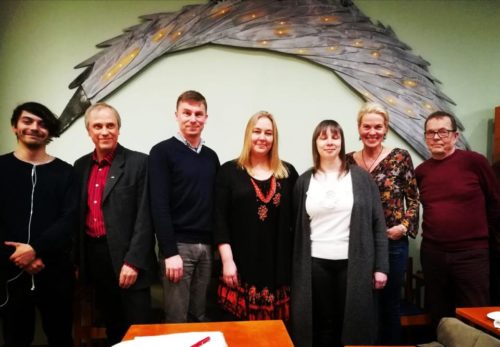 Venla Hiidensalo, who steered a wonderful celebration year, left for her maternity leave from the beginning of this year. In addition, PEN’s long-standing esteemed members left the Board are: writer Vilja-Tuulia Huotarinen has been on the PEN Board since 2009 and has done a tremendous job as chair of the Women’s Committee. Huotarinen organized events with her active network such as the annual Friend’s Day Club and the Aino Kallas Name Day discussions. Writer Leena Parkkinen has also been on the Board since 2009. She played a role among others in organizing the Nordic Co-operation Meeting in 2016 and participated in the Bishkek Congress in 2014. Publishing editor Lotta Sonninen has been a member of the Board since 2016. Among others she actively participated in organizing PEN Gala and in planning its year books. Johanna Sillanpää’s PEN career has been versatile and impressive. Sillanpää started as PEN Secretary and promoted to Executive Director in 2014. Sillanpää was elected to the Board in 2017. Sillanpää has been an active and important player in information, campaign, gala and fairs, and publishing activities. Hannele Mikaela Taivassalo was an important member of the Board and chair of Translation and Linguistic Rights Committee during 2018.

PEN Finland warmly commend all these members for their valuable work over the years. They have taken good care of the organization and whole-heartedly worked for freedom of expression. Warm thanks to all.