A Night With Sodergran

Before I decided to leave Iran I asked myself for the last time if I can really live as a writer in Iran or not. It was seven months before that well-known election. I tried to make a theatrical performance of A Night with Hamlet by Vladimír Holan which I translated to Persian. However, door was closed to all my efforts. Before 12th June 2009 some of us had predicted the coup, yet we did not expect how the impudent government would play with our hope and enthusiasm. Before 12th June I had written somewhere that we Iranians have Che Guevara but we don’t have Martin Luther King Jr. and if we do have Dr. King, we can find the way to freedom. After the coup, we had millions of Martin Luther Kings but we have a long way to freedom.

I realized this on the Freedom Street on June 15th after two days of running, chasing, tear gas, bullets and fire; after two days of disbelieving and the dreadful impact of the lie. A seventy year old writer contacted me, saying, “I want to join you guys for the protest; they won’t hurt me in respect for my grey hair”. I knew that he had seen Shah’s brutality, had lived the political slaughter of the early eighties and was breathing the memories of the massacre of 1989, but he still insisted on coming with us to the streets. The only excuse I could give him was that he would slow us down because he was old. The next day I realized that the coup-leaders were more impudent that the rest of the oppressors of our history. Not only do they dishonor elders, but they don’t have any shame in killing children either. In the Freedom Street three million Martin Luther Kings joined one another and chanted “I have a dream”. Our color was green, we were all green. People would wave their hands from the top of the buildings. There were green ribbons, colorful laughs of beautiful women and amazing enthusiasm of men.

It was sunset. We had tied the green strings of our dreams together and were going back home. Then, there was the sound of bullets, the color of blood, in just the moments on our way back home. I got to an alley covered with smoke and fire. They were taking away the wounded. Someone shot from the heights of his anger. I picked up a rock and I wanted to throw it as high as his anger…but I couldn’t. I slowly put the rock down. The rock was stuck in my throat like spite. That evening, just on that one alley, seven got killed simultaneously. The ambulances had to take the wounded to the hospitals, but we had no idea that they had the siren of death on. Most wounded were taken straight to the jail, many died.

The day we were Che Guevara they killed us at night and buried us in group graves. No one knew they had demolished our graves and they had built highways on the top of our remembrance. The day that we all became Martin Luther King in the streets, right next to the eyes of history and memory, right in the gaze of the cameras, they fired at us. Surrounded by fire and fear, I felt more insecure than before and I knew that the change will not happen soon and I can not do anything as a writer in such a military-state situation. I decided to leave Iran and I arrived in Finland the day Iranian parliament officially accepted Ahmadi-Nejad. I came to Finland to protest with my words.

Once Nima Youshij, the father of Persian modern poetry wrote: “A poet must accept martyrdom.” Why one must accept such a sacrifice to become an Iranian poet? The situation of the Iranian writers explains Nima’s statement. His student Ahmad Shamlou, the main figure of Persian contemporary poetry, experienced such martyrdom. When I was a student I was participating in a nation-wide poetry competition. I was awarded the gold medal four times. I never heard the name of Ahmad Shamlou until my sixteen. His name was eliminated from all the legal books and for sixteen years none of his books appeared in the country while he was nominated for the Nobel Prize in literature. Naturally, governmental poets could not be counted between martyrs in Nima’s statement. A state of terror has several children: terrorists, compradors, dealers, protestors, martyrs, silent majority. These categories describe different types of Iranian writers, publishers and institutes; they are dynamic, I mean people change their type, compradors become protestors and terrorists of one time become dealers of another time and so on. Among all, the true poets remain as a small group of isolated individuals that rarely give up their identity for another category. Because of the dynamic nature of these categories major cultural institutes will not live long and of course by the change of government their managers will change, as well as the whole policy of the institute.

I can never understand a culture without touching its poetry. I was living in Finland and there was not Persian translation of any Finnish poet, while Mika Waltari was a bestselling author in my country for several years. I was translating poetry for more than nine years, managing a project of world poetry translation with an Iranian publisher and editing a well-known online anthology called Persian Anthology of World Poetry where I published everything that could not be officially published in Iran. I translated more than one hundred world poets in the anthology, later other translators started to collaborate with me and contributed with their work.

I read several Finnish poets I found in English and Spanish translation. FILI gave me the possibility to work on them with the help of their grant and the books. I have chosen sixty two poets for an overview of Finnish poetry which are available in http://suomi.poets.ir beside an special issue available in http://poets.ir/index.php?q=taxonomy/term/413 .

Later on I worked on five more poets for further publication. One of them, Bo Carpelan, may appear this year in Iran as a printed book. We are waiting for the permission for the anthology but no one knows what will happen in the Ministry of culture. Instead of focusing on large number of poems I selected the poems that could communicate with the poetry-readers in Iran. Perhaps there will be other translators who will continue the work in the future on the basis this anthology provides.

After the coup, the government announced that the departments of Humanities are the enemies of the people because they teach western thoughts. Some academic branches were closed, like the cultural studies departments and many professors were fired.

Thousands of students and journalists faced jail, murder, torture and exile. Last year Iranian publishers were also under attack. They have been called the enemies of the people acting as soldiers of soft-war. Don’t panic, I mean soft-war, not software. Soft-war in the terminology of Iranian government means almost all non-governmental cultural products, silent demonstrations, peaceful critics, humanities and art.

Many Iranian writers claimed that they will not publish books anymore; many are waiting for the permission from the ministry. The situation gets worst day by day. Recently the government announced that if any publisher send us a book that contains non-acceptable
content, they publisher will be noted in the black list. Therefore they legally make the publishers to work as their censorship compradors even if they do not agree. At the same time everybody listens to the bluff of the governmental officials and the governmental writers: “If you want human rights, come to Iran. We are the freest country in the world.”

From the day I left up to now, I was witnessing their anger growing; despair occupying them day by day. I know that if the despair grows more the future of the country will be lost in bloodshed, anger and all the consequences of such despair. In despair, when you can not conquer an existing darkness, you will project it to someone else; I mean your friend, your brother or whoever you can. In a long history of dictatorship and betrayal, Iranians could not find a unity because they lost their compassion to each other. This is a fact the government is aware of. When a movement lasts long Iranians will get tired and they will start to fight with each other, therefore dictators of the time will remain always victorious. We have a proverb which says: “If partnership was good the God would take a partner”. Why this proverb could be applied to every Iranian project? Iranians did not learn team working and they always worked as individuals. The roots are in this history of despair and betrayal but the effects are horrible.

There will be Tehran book fair in a few days. The government announced that the main goal and the slogan of the book fair will be “Hijab”. At the same time the fight between the supreme leader and Ahmadi-Nejad is growing: Ahmadi-Nejad was forced to dismiss Mr. Mashai, a member of his family holding sixteen positions in the government. As a response Ahmadi-Nejad asked the minister of intelligence to resign. News agencies announced his resignation while the supreme leader asked him to stay and says that he does not accept his resignation. Ministry of culture is also not aware of the actual managers of the ministry: The head of the Books Department announced the approval for publishing of some books while the head of censor section of the same department does not accept the publication of the books: A dark comedy. Despair is spreading and the fight inside the government is growing. No one knows who will win this tragic race.

In One thousand and one nights a young girl and the devil are fighting with each other: the devil becomes a pomegranate, the pomegranate jumps to the sky and falls on earth and breaks, the beans are distributed on the floor of the palace. The girl transforms to a
cock and starts picking the beans. A single bean goes to a pool. The cock screams and looks at that single bean. The bean in pool becomes a fish, the girl jumps to the pool and transforms to a whale. They continue to fight until the devil becomes a flame and the girl transforms to a huge fire, they fight, the flame of the devil is harmful for the viewers and the fire of the girl does not harm anybody. In this story, the devil will die in ashes and the girl also dies. But at least she was lucky and conquered the condemned spell. The fight between the girl and the devil does not belong to any geography. It is the fight between the poetry and the power. Poetry transforms to everything and resists against that spell which puts a mask on everything and robs everything from its origin. Finnish poetry in another geography narrates the story of Iranians: it is the smoke from my homeland’s chimneys that comes out from the poetry of Edith Södergran. 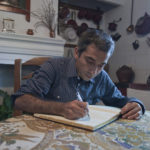