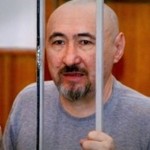 Aron Atabek is a poet, journalist and social activist. He has written several books of poetry and prose inspired by Tengriist spirituality and was the founder, in 1992, of the monthly newspaper Khak (The Truth). Atabek was awarded the literary “Almas Kylysh” prize in 2004 and the Freedom to Create “imprisoned” prize in 2010. Atabek has been in prison since 2007 and has spent much of his incarceration in solitary confinement. He has been an honorary member of Finnish PEN since 2012.

Please fill in this form to appeal for Aron Atabek to be released. We will forward the appeal for you.