Finnish PEN’s Freedom of Expression Award for 2015 has been granted to Abdirahim Husu Hussein (b. 1978) for his activity in the fields of equality and multiculturalism, business, and politics 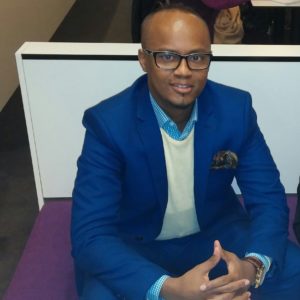 Abdirahim Husu Hussein has brought a sorely needed voice to Finnish discussion and culture. Born in Somalia, Husu is an immigrant who has refused to accept the role of victim allotted to immigrants. In the media and in politics he has contributed his own personal voice and emphasised that immigrants, the Finnish mainstream population, Somalis, or Swedish-speaking Finns do not constitute uniform groups. Regardless of age, birthplace, religion, mother tongue, or profession, people should be treated as individuals.

Abdirahim Hussein has worked as an entrepreneur, interpreter, and taxi driver.

I’m a Muslim, a man, a member of the Centre Party, hetero, a meat eater, and whatever else. When I go to the mosque I’m a Muslim. When I meet Africans I’m an African. One identity doesn’t exclude another, he has said.

Husu’s best known role may be that of a radio presenter. Together with Ali Jahangir, Husu has presented the Finnish Broadcasting Corporation’s Ali and Husu programme, in which Finnish society is examined humorously, constructively, and courageously. Ali and Husu have spoken of development aid, child labour, immigrant image problems and relationships with the trade union movement, Russophobia, chatting up Finnish women, and many other sensitive topics. At the same time they have extended the spectrum of participants, which normally ranges from balanced and politically correct Finns to racist hate speech.

Laughter can be dangerous, but in a restrictive media environment – which can even become violent — it can clear the air and be liberating, as the radio programme has shown. But for this there needs to be self-irony, and a realisation that one should sometimes laugh at oneself and even at one’s own values. Black and white thinking is destructive to people and to cultures. Matti Mäkelä has written in Helsingin Sanomat: Ali and Husu have vigorously rejected the place set out for them. They have not adapted to the role of immigrant, aiming above all to be human beings.

Husu Hussein works as a politician and has learned  how relative Finnish free speech can be. The same people who send in positive feedback concerning his blog about the party leader take issue with his free speech when he writes about Israel and Palestine. Husu comments: This has taught me that for some people free speech doesn’t actually mean anything, and that it’s nothing but a dead letter for them. I learned also that religious fundamentalists in Finland are as frenzied as elsewhere. The only difference is that here the law protects the freedom and physical integrity of the individual. I also know that if we are silent in the face of these fundamentalists, this protection will fail and we will swerve onto a bitter path of violence. 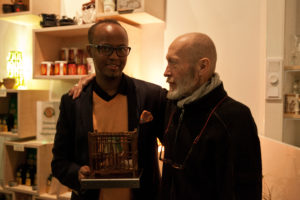 The freedom of expression prize awarded to Abdirahim Husu Hussein is Jussi Heikkiläs’s “Lintu” (“Bird”) [a miner’s bird cage from about 1900, a Russian-English dictionary (1978), stainless steel]

The previous winners of the award have been the cartoonist Ville Ranta (2012), the human rights activist and theatre producer Eva Neklyaeva (2013) and journalist, commentator, and columnist Kimmo Oksanen (2014).

Finnish PEN is an international organisation promoting free expression,  founded in 1928. It is part of PEN International which operates in more than 100 countries. According to its charter, its aim is to defend and promote free expression in literature and the arts all over the world.