Kai Ekholm is Director of the National Library of Finland. He is well known as a researcher on freedom of speech and censorship. His dissertation concerned books banned from libraries between 1944 and 1946. Ekholm has raised issues of freedom of expression in his work, and has vigorously defended the National Library – which preserves the common memory of the Finnish people – amid the economic problems facing Helsinki University.

In the present century, one of the most notable endeavours supporting Finnish freedom of expression has been the creation of the website Tiellä sananvapauteen (“On the Road to Freedom of Expression”). The site was constructed by a broadly-based expert group led by Kai Ekholm. It offers up-to-date scholarly information on Finnish legislation, censorship, and freedom of expression, from the start of the 20th century to the present. The website is easy to use, informative, and striking in appearance.

In 2017, the website received the Finnish State Award for Public Information. Under Kai Ekholm’s direction, the National Library made a major decision in 2017, allowing researchers and other interested people full access to the digital newspaper archives for 1918 – i.e. less than the normally prescribed 100 years from original publication. The decision was based on the exceptional importance of the period, which included the Civil War, and which called for prompt study and free access.

The availability and openness of the National Library’s digital magazine archive has promoted freedom in research, with unrestricted access to information. These are two important factors in a free civil society. Finnish PEN thus has the honour to grant to Director Kai Ekholm its annual Freedom of Expression award. The award takes the form of a work by the artist Kaiju Haanpää, entitled Istafan. 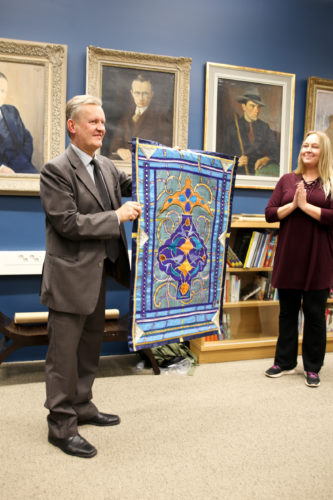 Finnish PEN’s Freedom of Expression Award is awarded annually to an individual or organization for their distinguished work in promoting freedom of expression. Kai Ekholm is the seventh receiver of the award. The previously awarded are: Sunniva Drake (2017), Matti Suurpää (2016), Abdirahim Hussein (2015), Kimmo Oksanen (2014), Eva Neklyaeva (2013) and Ville Ranta (2012).