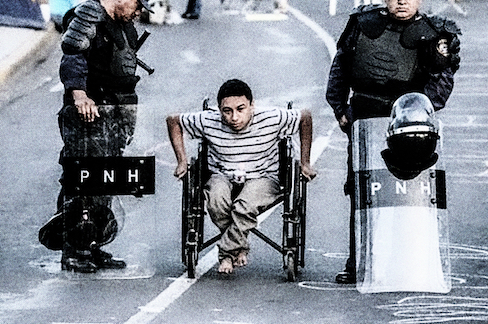 Erlin Armando Mejia Andino landed in Sweden three years ago, he is a 25 years old Honduran-born human rights activist who fled his home land for political reasons. Alongside with him came his mother, Yessenia, his three sisters: Hilda, Ana, and Linda and his two infant nephews, Andrea and Angel. From that day on Erlin and his family stopped being who they were to walk the refugee’s destiny: to be always persecuted.

In addition to the fact that they had never taken a plane before, all of them were tired and scared because they carried the shadow of a death sentence over their shoulders. Back then, like today, returning to Honduras means that: death.

The shadow of that threat has materialized on several occasions to their dismay. Erlin’s deaf sister, Ana Milagros, was kidnapped in August, 2016. The kidnapping, Erlin says, was an act of possible revenge towards his political activities, pointing out a hunger strike where Erlin participated and took place outside the National Congress of Honduras, denouncing the liaison between Honduran politicians and the drug cartels in the region. As a consequence of that, Ana Milagros suffers from post-traumatic distress till today.

According to Erlin, the catastrophic political scenario in Honduras led to the murder of the environmental activist and indigenous leader Berta Cáceres in 2016. In the same context, Erlin is today being persecuted for defending the right to health care for disabled people in Honduras. In that sense, Berta and Erlin are both emblematic figures because of their fight for dignity and life.

Despite it all, Erlin and his family have stuck together as they have done so in the past. Erlin and his sister have both disabilities and seaking for proper health care in Honduras has always been a struggle. In the particular case of Erlin, he was born with Osteogenesis imperfecta (OI), also known as brittle bone disease, and he suffers from epilepsy. The OI made him a wheelchair user and it took him to the hospital several times during his childhood. Back then, the surgery made him emotionally stronger and politically lucid rather than weaker. While in the hospital, he was able to see people with disabilities struggling to get treatment, eat properly, and provide for their families. He witnessed the pain which means having healthcare bills to pay without any help. Erlin knew by then that he did not want others to be sorry for his condition or for the seizures that haunts him at night, he only wanted to do better for others.

Do you remember any moment that had changed you forever and consequently led you to become the activist you are today? I asked him.

”Yes, I was invited by a friend to a political rally one day,” Erlin said to me with his soft and pitched voice. ”During the assembly, I raised my hand and proposed a commission that would coordinate the social struggle from the people at the streets to the congress, serving as a link with the Liberty and Refundation party (Libre) so that Libre could promote policies in favor of people with disabilities inside congress . From then till now; my life has been different; it marked my destiny.”-

Erlin also got involved in a series of general protests, known as the Torch Movement, that paralyzed the country back in 2015, gathering up to two million people against the governmental corruption and embezzlement scandals. The second was a hunger strike against reelection and claiming justice for the murder of Berta Cáceres. Erlin’s activity escalated the political persecution that led to his sister’s kidnapping and his illegal detention.

Not the least Erlin and his family have managed to escape and make a life far into the north with the support of Oxfam Intermon. In Sweden his nephews go to school, his sisters are working, and they have a network of friends that have become their family. Within the Nordic country, Erlin and his family have also found organizations that have helped her sister to recover from the PTSD syndrome caused by her kidnap.

Nevertheless, their new beginning is being threatened today. A resolution given by the Swedish Migration Agency on their case has denied their asylum status for the third time, forcing them to seek an appeal at The European Court of Human Rights as the only resource left. If they do not receive asylum in Sweden, it is clear for them what the outcome will be. The fear for their safety is well proven and haunts them even far away from home. The harrowing memories of violence and persecution would never leave them, but at least, if granted asylum, they could now rebuild their lives once again, missing the country they had to leave to save their lives. The country they have tried to make a better and equal place for all.

Claudia Morales. Mexican author and anthropologist. She has published the books Hospitalidad, 2014 and No hay Retorno, 2015. She is currently studying her Ph.D. in Medical Anthropology at the University of Massachusetts, Amherst. While actively supporting migrant organizations, primarily oriented towards the Honduran community in the US.

More on ERLIN´s case and Honduras:

NEWS ON MY SOCIAL FIGHT