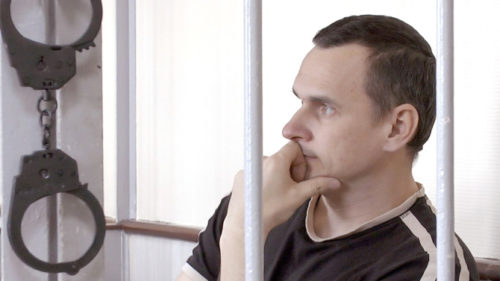 Prominent Ukrainian writer and filmmaker Oleg Sentsov arrested four years ago and sentenced to 20 years in prison on spurious terrorism charges after a grossly unfair trial by a Russian military court, marred by allegations of torture. He was on hunger strike from 14 May 2018 to 6 Oct to urge the Russian authorities to release all Ukrainian nationals currently imprisoned in Russia on politically motivated grounds. Oleg Sentsov was  Finnish PEN joins PEN International’s call to free Oleg Sentsov immediately.

Please sign the online appeal NOW: Oleg Sentsov is one of the writers of PEN International’s Day of the Imprisoned Writers on 15 Nov 2018.

Please fill in this form to join in the petition. We will forward it on your behalf.

You can send your own appeals to:

Ambassador of the Russian Federation in Finland
Pavel Kuznetsov
Tehtaankatu 1B
00140 Helsinki
rusembassy@co.inet.fi

Tampereen Teatterikesä event hosted a play called Burning Doors in August 2017, which is partly based on Oleg Sentsov’s experiences. Finnish PEN collected then 109 signatures to free Oleg Sentsov, opened up the online appeal and has been campaingning for Oleg Sentsov ever since.

In August 2018 Finnish PEN addressed the president Sauli Niinistö in an open letter and asked him to raise Oleg Sentsov’s case in the discussion with president Putin when they met in Sochi (availabe in Finnish). Niinistö later that he had discussed Sensov with Putin (HS.fi, in Finnish).

In July 2018 Finnish PEN and PEN America hosted an open event during the Trump-Putin summit in Helsinki and called Oleg Sentsov to be freed. Availabe in Finnish only.

Letter from Ukrainian film-maker Oleg Sentsov smuggled out of prison (The Guardian 12.6.2016)